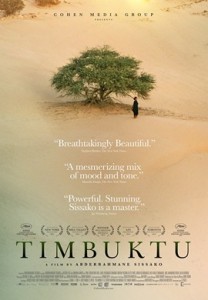 Once upon a time Timbuktu was synonymous with the last outpost of Western Civilization.  This town in North Mali at the edge of the Sahara desert was also a cultural centre of Islam. ‘Timbuktu’ the movie, does justice to the mysterious and tantalizing town while capturing the wild beauty of the nomadic life in the interiors of Africa. The movie won at Cannes and had a formidable run at the film festivals culminating in an Oscar nomination. The story is that of a cattle herder and his family whose traditional way of life is interrupted when the town is taken over by conservative Islamic terrorists. What ensues is a series of curbs on the life of the people, with football and music among the things banned. Mesmerizingly shot scenes only add to the authenticity of the film with a group of amateurs turning in performances they can be proud of. Though some of the scenes like the imaginary football one did not work for me, the movie is a definite winner for its ability to portray a polarizing subject dispassionately.

At a time when USA is in the throes of major racial tensions, this film throws light on the lives of African-American students in an Ivy League university. It is a movie which focuses on the relationships and changing dynamics among the students with a dose of racial issues adding to the mix. The movie has good production values and for once there is a role reversal with the minority students playing the role of the erudite people and the whites being the troublemakers. Though the movie does flag towards the end, it is a one time watch. 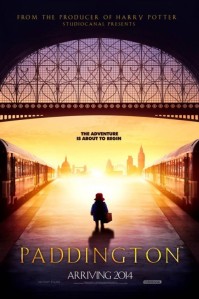 A bear from Peru lands up in UK and gets a place to stay with a kind family. Soon enough, a villain turns up and the rest of the story is about how good triumphs evil. The movie is told at a decent pace and keeps the viewer engaged. With dialogues which have an element of humour in them, the movie is quite an easy watch and certainly one of the good ones of 2014.

Billed by the producers as a “gangster-musical”, this Tamil film scooped a few National Awards including one for the antagonist played by Simhaa. In fact, he is the show stopper with his carefully nuanced performance becoming the highlight of a movie with a convoluted plot. A contestant in a TV show bags a project to direct a movie but the catch is that he must make a movie about a gangster. In his steadfastness, he starts to tail a real life gangster, only to be caught by the gangster. From there the movie takes myriad twists and turns before finishing in an anti-climax. Highly recommended.

An instant cult classic for movies with prison as a background, ‘Starred Up’ starts on a high and vaguely resembles the French classic ‘A Prophet’ (2009). But then the movie gets into unchartered territory with a bit of family drama complicating an already tough tale. With a career defining performance from Jack O’Connell, the film is a gripping story about a standoff between a teenage prisoner and the establishment. Highly recommended.

Will Ferrell plays a hotshot Harvard Business School Graduate (yes, you read that right) who makes money for fun on the stock market. Kevin Hart plays a car washer who nurses dreams of making his business bigger. Destiny brings them together. The movie does have some funny scenes but it is laborious in the second half and becomes boring as it keeps on moving away from its story brief.

This critically panned movie has received a much more favourable response from the viewers. It tells the story of a pianist who is diagnosed with ALS. As she disintegrates, she comes in contact with new people in her life. A tearjerker for those who are interested in crying, the movie does not have anything extraordinary to say. Even Hillary Swank who has an author backed role dwarfs in comparison with performances of people who share the screen with her.

I believe that Vikram Bhatt gets to direct movies because his family produces and acts in them. Emraan Hashmi’s new flop has him gaining the power to become invisible. That helps Tanmay Bhatt of AIB to fill the screen. The lead actress in the movie has nothing to do. The producers could have done with just the lips of the lady as that is the only part of the actress called into action. Maybe, she could also have gained some power to disappear from the movie. The movie has low production values and is evidently directed by someone from another era. What more do you expect from a director whose last five movies were ‘Creature’, ‘Raaz 3’, ‘Dangerous Ishq’, ‘Haunted’ and ‘Shaapit’ ? Thankfully, the audiences also gained the power to become invisible from the movie halls.

A look into the origin, growth and stupidity of the cult of Scientology. Must watch.

Eagerly waiting for: ‘The 100-Year-Old Man Who Climbed Out the Window and Disappeared‘  because titles don’t get more interesting than this.

Did you know: In the movie ‘Shrek’, the right hand page of the book at the end of the film says ‘The End’. The left hand page says ‘And they lived ugly ever after. ‘