This heartwarming Swedish drama which has music that is entertaining and uplifting is one of the best feelgood movies you will ever see. An internationally renowned conductor returns to his small town in Sweden where he discovers hidden musical talents and realizes the life he had missed. Though the film is another one of those which contrasts the hustle and bustle of the city life with the relaxed pace of life in the village, it is a movie where the sincerity of the intentions overcomes the little rough edges in the screenplay. The acting is uniformly magnificent. Highly recommended.

In a country where playing music of the Western variety is banned and where freedom of expression is an alien concept, it is remarkable how Iranian film makers consistently come out with small gems polished by their passion for speaking out against an oppressive regime. In this winner at Cannes, the director follows the story of a group which wants to make rock music. As if this wasn’t enough to land the group in trouble, they go about recruiting new members to their band and also try to arrange for visas so that they can perform in London. For the umpteenth time I would like to reiterate that it does not require too much money to make a good movie as this one shows. Also, a very good film to watch.

Coming from the writer of ‘Trainspotting’, this one was sure to have a dose of drugs. Here James McAvoy is a messed up corrupt cop who is having a difficult relationship with his wife and kid. He also has a drug problem and is involved in a case where he has tied himself in knots. With all this happening around him, he also want to have a career progression and he thinks that one of the ways of ensuring that is to play his rivals against each other. As he spirals out of control and loses touch with sanity, the key question is whether he will be able to hold on till he sees out the storm. James McAvoy is the cop in this very engaging story of deception and drugs which fully exploits the huge talent of McAvoy. At times too gloomy and at times a little slow, the film compensates for its flaws with a story which keeps you guessing till the very end. A very good watch. 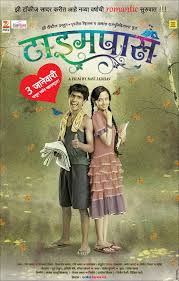 Recommended by a brother to me, this Marathi hit is a simple tale of two ordinary adolescents who fall in love. The good for nothing Dagdu falls head over heels in love with a girl who is the daughter of a disciplinarian father. The movie is about how they overcome the barriers and break the boundaries in pursuit of their relationship. Just as the movie starts with the caption of there being nothing like first love, it prepares you for the eventual end which is pretty open and hints at a possible sequel in the near future. More than the main story line, it is the presence of the fringe supporting characters who add to the quality of the film. In fact, the best lines are delivered by the supporting cast and they are the ones to tickle the funny bones. It is also because that the characters look very rooted to the people you will meet in the street that the film is an easy watch. A nice one time watch.

I think the producer’s biography could have the same title as the that of the movie. I could not understand the reason for the existence of the film. It has a story that goes nowhere, songs that make you run out of the theatre and a hero who is better at singing those songs than in acting. The protagonist is in love with a lady who is the daughter of an IAS officer. She also loves him back but her dad is against the relationship and wants to make sure that the guy is the right one for her. Sounds familiar? If familiarity breeds contempt, the director ‘complicates’ things by referencing the mass sacking of its employees by Jet Airways a few years ago and make sure that the protagonist is jobless. (Spoilers ahead) The next thing you know, the protagonist is serving at the counter of an eatery where he suitably and conveniently gets insulted by the girl’s father. More of such shenanigans and then suddenly the sky clears up. Well, you cannot blame the director for not giving you a happy ending. What a bore.

A study of the reasons behind the decline of the honeybee population around the world which also traces the consequences of the same. Not a great documentary but worth a watch.

Julia Roberts is the lady love of a man who has kids. The mother of the kids is a terminally ill patient (played by Susan Sarandon). Both the women must reconcile their differences and find a way forward to make it less painful for both of them. The film is a drama that does not have a great story to tell. It is solely driven by the great performances of the leading ladies that brings them to the foreground and pretty much makes everything else immaterial. Watch it for them.

A man falls in love with a woman because of her ‘inner beauty’. This film focuses on a basic question. Whether love is constrained by physical appearance and whether two people can be happy even if they have dissimilar body shapes? Well, the film does not get that philosophical and has some good laughs to offer. The casting is a little inspired. Paltrow and Black in a reversal of their real life personas. Worth a watch.

A legal thriller that tries to distinguish between what is morally wrong and what is legally punishable. Jeremy Irons is on trial for the death of his wife. There are two sides to the story and both the sides don’t give conclusive answers to moral questions. A taut engaging screenplay tries to give the answers and the legal process is as riveting as it has ever been presented on the big screen. Watch for some superlative acting and a very engaging story that keeps you interested till the very end.

Did you know: Pierce Brosnan was contractually forbidden from wearing a full tuxedo in any non-James Bond movie from 1995-2002.