The first instance of two actresses sharing the gong for the best actress (for the same film) at Cannes is reason enough to watch this little French gem. I was reminded of this movie after reviewing ‘Blue Is the Warmest Colour’ a fortnight ago. If ‘Blue …..’ is the adolescent version, then this one is the mature version. Two financially broke women share a flat and hope for a better future from the misery of routine lives. Once more characters enter the frame, their relationship unravels. Then the two actresses revel like veterans on screen. Watch it for them.

A man facing death recollects his life. His sorrows, his triumphs, his childhood, his loves and much more. The nation’s history also plays out in the background. As they say, once your whole life will flash in front of your eyes. Make it worth watching. A timely reminder on that concept from (of all places) Russia. Classic. 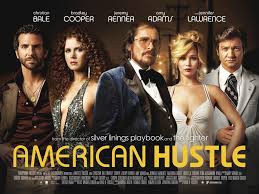 I could not really figure out why ‘American Hustle’ is getting nominated at all major awards in so many categories this year. Agreed that it is a good movie but to call it a great one is a slight misrepresentation of facts. As the name suggests, it is a con movie but with a conscience. It certainly has some good performances going for it. Amy Adams delivers another competent one. I am a huge fan of Jennifer Lawrence and that makes me think that she deserves the Oscar for Supporting Actress but that would be an improbable win considering that she just landed the Best Actress Oscar only last year. At the same time, Bradley Cooper may consider himself lucky if he wins for the Best Supporting Actor because it wouldn’t be possible but for the sympathy votes he gets for his failure to win last year. Coming back to the movie, it creates the right ambiance and the credit for that has to go to the director. Other than that I did not find the movie to be special in any sense. Anyone with the IQ of a lamp post could have seen the twist in the end coming because such movies need to have one. I think the guys in Hollywood are all excited because someone finally made a movie in which the FBI is taken to the cleaners.

What they say for wine is true for Woody Allen too. Both get better as they age. For a change, Woody Allen is not putting some old wine in a new bottle. He moves to a new terrain and after a long time I was really impressed by his direction as he brings the best out of Cate Blanchett. I have not seen the movie ‘Philomena’ in which Judi Dench is reported to have given a great performance. If Judi Dench has not pulled off something spectacular (and she is well capable of that), then this year’s Best Actress Oscar will go to Cate Blanchett for her affecting portrayal of a former socialite going through emotional distress and penury. Her acting is simply stunning and it helps that the the whole plot revolves around her. For a profoundly sad tale, the trademark witticisms of the writer brings relief even in the gloom. Two thumbs up to one of the best written and acted films of 2013. 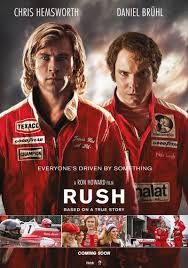 ‘Rush’ recreates the fierce and famed rivalry of two Formula 1 superstars of the 70s, Niki Lauda and James Hunt. I expected more thrills and edge of the seat action for a movie based on a sport which has a lot of scope for spiking adrenaline levels. It disappoints on those two counts. In fact, it is not even about the rivalry between the two drivers. It is more about their personalities and the obsession they have for winning against all odds. Niki Lauda comes across as a calm and determined man who is organized and thinks about racing even during his honeymoon. James Hunt, on the other hand, is the brash character who has too many woman in his life that he does not really have to have a separate honeymoon. To slightly twist the title of a book that went from non-fiction to fiction (cycling, if you still don’t get it), ‘it is not about the cars’.

The true story of an US assault team which sees their best laid plans go for a toss in an operation in Afghanistan. The film is quite slow off the blocks but soon catches up with long strides shortly after. Once the action starts it is quite an interesting film. There is nothing to rave about but then the film is definitely worth a watch.

Perhaps the best story on the mafia outside the ‘Godfather’ series. Must see. Period. 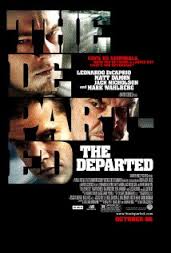 The movie that finally got Scorsese the Oscar. In my opinion, the perfect screenplay.

Some movies define a period in history. Some performances are so great that it is impossible to imagine someone else in that role. Some movies are unforgettable. Taxi Driver. Robert De Niro. No excuses for not watching.

How does it feel to be a rock star (pun intended) in one part of the world and be an unknown in your country of residence? One of the most uplifting documentaries ever made.

Eagerly Waiting for: ‘The Grand Budapest Hotel’ because it has a large cast and a fine director in Wes Anderson.

Did you know: After the release of the Tom Cruise film ‘Top Gun’,the applications by young men to the US Navy went up by 500 percent. 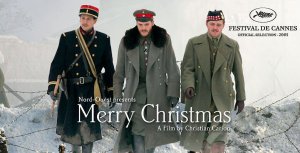 Based on true events, the film tells the story of enemies united by music and the spirit of Christmas. During the First World War, German, French and Scottish soldiers momentarily stop fighting on the eve of Christmas and celebrate it together. It is little difficult to describe because it looks surreal. If I were at the scene, I would have pinched myself. They just lie down their arms, exchange hugs, sing, celebrate Christmas and then go back to fighting. Nominated for Oscar in the best foreign language film category. Did not win. Even the Academy voters would have found the story too good to be true.

Exquisitely shot anti-war romance. Italian soldiers land in a Greek island during the World War 2. The story develops as they come in contact with the people (some of them too gorgeous) of the island. Picturesque locations and the laid back life of the islands have an enduring effect on the soldiers. Though set during the World War, it is a light movie which moves at a leisurely pace. Only thing that can hold you back from watching this Oscar winner is the damning fact that it was produced by Silvio Berlusconi (yes, the Bunga Bunga guy). On a serious note, worth a watch.

The thing about ganging up to commit robbery is that trust between the gang members is an absolute essential. The uproarious British comedy explores what all could go wrong when each member of a four member gang tries to double cross one another. Jamie Lee Curtis is in the role of a lifetime in this film which has comedy at its core but also has a story to tell. The sad thing is that many Indian movies have unashamedly stolen scenes from this movie. Otherwise, perfect weekend entertainment.

The original boxing classic based on the life of Jake LaMotta. LaMotta reaches the heights by channeling his rage and anger on the boxing ring but as he climbs the charts, the same flaws take a heavy toll on his personal life. Robert De Niro deservedly won an Oscar for his performance but Scorsese had to wait till ‘The Departed’ to land his first one. The movie is a lesson on life. Don’t miss the title sequence in the beginning. I would have given Scorsese the Oscar just for that.

A man’s search for his last remaining relative who has been kidnapped at a tender age. His persistence and focus also leads to morally ambiguous situations. After years of staying away in a different culture would the girl still want to come back? Will he take her back when she discovers that she is no more like the girl he was searching for? Tough questions. Watch the movie which is often cited as the best Western ever made.

A boy and a girl fall in love. Then they are separated. The boy does not let go and pursues the girl. Simple story. Only issue is that they live in different worlds which have opposite gravity. Since digitally everything is possible, we have a plastic world where things are so beautiful that you know they don’t exist. Since the science is spurious, the story also feels fake. Maybe, you can take your partner to the cinema, eat popcorn, discuss few things and occasionally look at the screen. 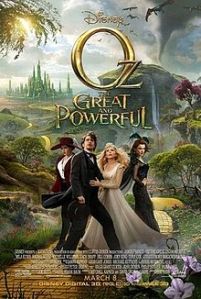 The initial idea behind big budget animation films was that kids will drag their parents to the cinema and help sell those extra tickets. Disney has laughed all the way to the bank on a couple of occasions milking this idea. Now things are not so simple. So they have to throw in Rachel Weisz, Mila Kunis and Michelle Williams to attract the right kind of audience. The grown ups can ogle at the beauties while the children can have the real fun. The movie is strictly for kids. They may enjoy it. 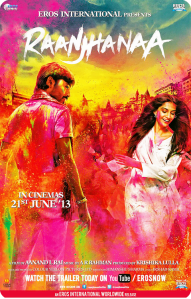 One line verdict: Not a bad film by the standards of Bollywood. Now the real thing (Spoilers ahead). If you think about it, ‘Raanjhanaa’ is a regressive film. The Muslim girl cannot marry any Hindu guy even when she has a choice of two. The leading lady is manipulative and does not really love any of her suitors. Truth be said, the film is about the love story of two different men for the same girl but it is all one way traffic. One of them is dumb enough to try his luck at marriage by posing as a Muslim and the other gets into politics of which he has no clue. The most sincere scene in the movie is when the men bond at the hospital bed of Abhay Deol. I have not lived in Uttar Pradesh but I can safely say that wrist slashing at the drop of a hat is not the preferred mode of wooing a girl in any part of the country. Come to think of it, Dhanush’s character is a bigger psycho than Shahrukh Khan of ‘Darr’. Here the stalking is direct and so in your face. Unfortunately Dhanush looks so earnest in his performance that you are willing to give him some sympathy but if you want to see why he won the National Award for best actor, watch ‘Aadukalam’. The good thing is that the movie does not really bore you and A R Rahman’s music helps the cause. Moral of the story for men: You cannot force anyone to love you and when you understand that get out of the scene. Otherwise you may find yourself in a coffin and the girl won’t even cry.

Some people have too much courage or are they plain crazy? In which category would you place someone who walks 200 feet on a wire between two buildings at a height of 110 storeys? That too, without any safety features. One guy did it in 1974 and this is the documentary on him and his activities. Don’t try at home.

Eagerly waiting for: ‘The Lone Ranger’ because of Johnny Depp.

Did you know: The African Americans who acted in ‘Gone With the Wind’ were not allowed entry to the premiere of the movie.