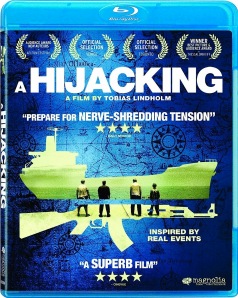 Somali pirates have given a new topic for filmmakers for ideating and the world is now raising a toast to the Tom Hanks movie ‘Captain Philips’. Incidentally, an equally acclaimed film on a ship hijack was released in 2012. Based on real events, the Danish film ‘A Hijacking’ is a gripping drama about a hostage situation. The focus here is more on the long drawn out negotiations. A psychological cat and mouse which focuses on the people than on the events.

There are some movies which make me want to visit the locations where they were shot. For example, I went to Bruges in Belgium only because ‘in Bruges’ was shot there. Anatolia in Turkey is one region i would like to visit after watching ‘Once Upon a Time in Anatolia’. The plot of the movie involves a police search for a dead body in Anatolia but then the film is not about the story. It is more an exploration of the terrain and its wild beauty. This movie is a visual treat even when most of the region is explored during the night. No wonder it won the Grand Jury prize at Cannes.

The movie is a cult classic and one of the most rented movies on Netflix. Strangely, it still connects with teenagers, three decades after its release. This movie is a testament to the idea of beauty in simplicity. The story revolves around the sixteenth birthday of a girl. Though utterly predictable, the easy dialogues and carefree acting creates the right kind of ambiance. Almost all the credit for this goes to writer-director John Hughes who went on to make many memorable movies. An easy watch.

Idi Amin was rumoured to have blood in the list of drinks he used to have during his tyrannical rule of Uganda. Forest Whitaker becomes Idi Amin in a performance which clinched him the Oscar. His Oscar winning speech is one of the most sincere I have ever seen. Watch it here http://www.youtube.com/watch?v=4-fGCHGTaGE . James McAvoy plays the Scot who became Amin’s personal physician. The movie has a brisk pace and is a piece of history told in an entertaining way. An underrated gem.

A rich girl falls in love with a poor boy. That is a plot which gives cliches a bad name but with ‘The Notebook’ the story gets a new appeal altogether. Shot in breathtaking locales with freshly minted dialogues, the story is a an easy romance. The good part is that the best dialogues belong to Ryan Gosling and he has a field day mouthing them. The movie almost made it to the top 25 romantic movies covered by me a fortnight ago. It would have been a shoo in if it had been more tightly edited.

Coming to cliches, animation movies are now turning out to be a parody for real life cliches. In ‘Monsters University’ every single prop of a college movie is used which leads to mixed results. The story is as predictable as the plot of a Karan Johar film but the animation is exceptional. Some of the fine touches have to be viewed in slow motion. The animation movies are getting a little stale but this one is among the better ones to have come out in the last few years.

When the producer of ‘Pirates of Caribbean’ series makes a movie with the venerable Johnny Depp as a native Indian, you expect more. Here, you get more of the same. They just forgot that they were shooting another movie with a more serious theme. Depp cracks the same type of jokes he had in ‘Pirates of the Caribbean’ with elaborate action scenes to keep the kids glued. Along the way they forget the story and by the end the viewer also does not care.

I must admit that I now have a grudging admiration for the guys at Google. They made the longest corporate ad film and then got people to pay for watching it. Two guys who have zero skills land an internship at Google and then everything just works out perfect for them. They also educate us about various Google projects and products. In case you did not know, Google gives free food to its employees. Learn more such useful information as veterans like Vince Vaughn and Owen Wilson make complete fools of themselves in this utterly boring film scripted to sell the goodness of Google.

The only reason for watching this movie was the controversy over the working style of Lindsay Lohan. For such an apology for a movie, the real shock is that it is written by the same guy who wrote ‘Taxi Driver’.

Some naive people want to be filmmakers. They have no money, no talent, no story and no sense. They do have truckloads of passion. A documentary which follows such a group. Tragically hilarious.

Eagerly Waiting for: ‘12 Years a Slave‘ because Steve McQueen makes movies which are painful to watch, in a good way.

Did you know: Sally Field who played Tom Hanks’ mother in ‘Forrest Gump’ is only 10 years older than him.