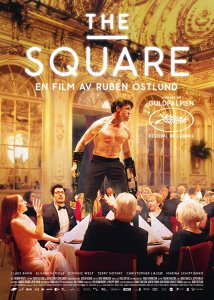 Winner of the Palme d’Or at Cannes, this movie straddles between the realms of satire, drama and social commentary. The largely successful attempts to have some fun at the expense of the vacuous art world do not compensate for a screenplay notable for its inconsistency. The director bites more than he can chew. The missteps of a director at an art museum and the shenanigans surrounding his life form the bulk of the story. Then there are multiple strands on immigration, social media hype, artless art and allegories on the state of the society. The farce culminates in a mystifying sequence at an annual reception. ‘The Square’ is an entertaining movie in most ports but is more memorable as an opportunity squandered.

Some actors have the ability to rise above a movie and draw the viewer in. Daniel Day Lewis is perhaps the greatest living actor and what a pity that he makes movies once in a blue moon. As the workaholic designer in ‘Phantom Thread’, he is a joy to watch. His screen presence and a masterclass in acting take the otherwise average movie a notch or two higher. The story is about a designer at the top of his game and the interruptions in his life when a lady as hard as a nail walks into his life. The cinematography of the movie is first rate and the director should take some credit for keeping the movie as taut as he could. Watch it for Daniel Day-Lewis.

The story of author Charles Dickens as he pulls out all stops to get the classic ‘A Christmas Carol’ published after reeling from the failure of his three previous novels. The movie does a good job of bringing the persona of Dickens to screen. Although a bare minimum knowledge of ‘A Christmas Carol’ will be needed to understand the movie well, the lack of it will not be a hindrance to enjoying this movie which celebrates the life of Dickens. Not only is there a context to the creation of ‘A Christmas Carol’, there is nice back story to the life of Dickens and his evolution as an author. This movie is one of the lesser known and yet eminently watchable releases of 2017. 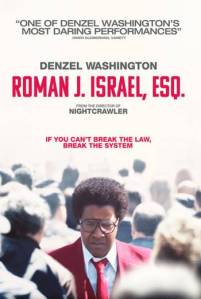 I expected much more from the director of ‘Nightcrawler’ and what was served was a damp squib. The only saving grace of this mangled venture is a powerhouse performance from Denzel Washington. He plays a civil rights lawyer who gets the short end of the stick after a selfless life dedicated to causes he believes in. He goes rogue and from there on the director also goes rogue. Some movies tie themselves in knots and have no fair chance of untangling the mess. This movie, after a certain point in the narrative, is in dire search for a climax. Imagine you have in mind a juicy piece of chicken and what you get is a wet piece of chicken dripping with water. This movie is the cinematic equivalent of that wet piece of chicken.

Jeffrey Dahmer was one of the worst serial killers in history. He was a sociopath. Before he started his killings, he was the classmate of a cartoonist in high school. This movie which is based on the best selling graphic novel by his cartoonist friend tries to shed some light on the making of a sociopath. The movie is a character study and does not try to airbrush the brutality of the killer. The good part is that there are no killings in the movie as the movie shows the build up to the creation of a monster. Packed with competent performances and a strangely memorable ending, this is a movie which is certainly worth your time.

This movie tells the story of the people behind the creation of ‘National Lampoon’ through the story of one of the co-founders of the magazine and movie franchise. The movie takes a format which gives it a feeling of a documentary. A bevy of comedians including Chevy Chase are part of this ride. The story is told in a conventional format and is thoroughly entertaining. The only gripe could be that for a story full of irreverent people and unconventional ideas, the director sticks to a rather straightforward narrative. Still, recommended.

Robert Pattison shows that he can act. He and his mentally challenged brother have to solve a litany of problems in the aftermath of a bank robbery. ‘Good Time’ loses its pace at some key moments and the work could have been more unsettling in the hands of an experienced director. Nevertheless, the famished face of Robert Pattison carries the weight of the movie. He is practically unrecognizable from his ‘cool dude’ image in the insufferable ‘Twilight’ franchise. The last scene of this movie is a knockout and summarizes the movie in the most effective way possible. Watch, if you like slow dark stuff. 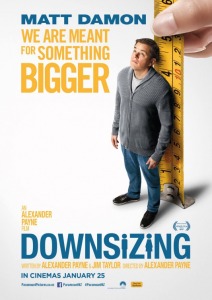 I believe that Alexander Payne is one of the most overrated directors of our time. He has received undeserved praise for pedestrian films like ‘Nebraska’, ‘The Descendants’ and ‘About Schmidt’. Finally he is exposed in this ruinous and boring movie called ‘Downsizing’. Matt Damon signs up to a new program in which people who are shrunk in size with the aid of science start living in secluded gated communities. After the first twenty minutes, this movie is a bore fest with the viewer wishing that he could also shrink in size and disappear from the movie hall. The movie is just an ego trip for the director and soon tumbles into a the worst mode possible at a cinema; it becomes a pulpit for preaching. Save your time. Think big. Skip this small minded movie.

‘Only the Brave’ has the right blend of emotion and action to keep the viewer engaged. It tells a story of firefighters with all the technical stuff while ensuring that the human element is never lost. The story follows a band of characters with a back story which helps in keeping the viewer invested in the destinies of the people on screen. Highly recommended.

The story of a small community bank which was the only financial institution taken to trial in the aftermath of the 2008 financial crisis. When the companies that were deemed “too big to fail” were bailed out, this small bank was considered too small to be trampled upon. Engaging watch.

Eagerly waiting for: The Academy Awards on March 4.

Did you know: In the first edition of this blog in April, 2013, this section told the story of Kevin O’Connell who held the record for maximum Oscar nominations (20) without a win. As a testament to the power of perseverance, he broke his bad luck dating backing to 1984 (his first nomination was for ‘Terms of Endearment’) and won his first Oscar on his 21st nomination. This was for Sound Mixing in ‘Hacksaw Ridge’ last year. The new holder of the unenviable ‘most nominations without a win’ title is another veteran at Sound Mixing: Greg P. Russell, who has 17 nominations to his credit. As an aside, cinematographer Roger Deakins who is right up there in the list with 13 unsuccessful nominations is nominated this year for the 14th time, with his brilliance in ‘Blade Runner 2049’ giving him the nomination this year. Here’s to a win for Roger Deakins.