A young unemployed cellist is forced to take up the job of preparing the dead for funerals. What makes the film unique is the distinct cultural landscape of Japan where your job and matters of death are of high importance. The movie is an audience pleaser with moments that will make you smile and reflect. The underlying idea is something I strongly believe in; every job deserves dignity and respect. Come to think of it, I would have watched the movie just because of the title. Death as just departure. 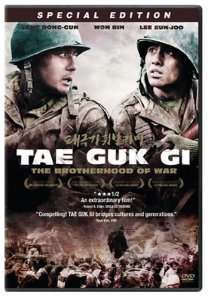 This movie was recommended to me by Rithin, one of the readers of this blog and I would like to thank him for that. This Korean war film tells the story of two brothers caught in the quagmire of the Korean war. The elder one enlists in the army to protect the younger one but as the story progresses fissures appear in their relationship. This is an out and out war film with some sentiments thrown in. The thing about Korean movies is that they are as melodramatic as commercial Hindi films but they also try to tell a story. Some of the war sequences are quite impressive for an Asian film but the same cannot be said of the computer graphics. It becomes evident that some of the scenes are shot on set. That can be pardoned as the budget of the movie is a fraction of what a similar Hollywood film would have demanded. Some of the scenes are flimsy and technical finesse is evidently missing but that is compensated by the scale of the film and the well choreographed action scenes. I would definitely recommend it for fans of war movies.

Jane Campion became the first woman director to win the Palme d’Or at the Cannes with this master class which is a romance at its heart but has equal amounts of mystery and adventure thrown in. A married woman has a torrid affair with an odd character which shakes the world around her. Other than the outstanding performance by Holly Hunter in the lead role, watch out for the promising performance  that Anna Paquin delivers as a child. The film is so beautifully shot that viewing it on a small screen would be an injustice.

Another Vietnam War classic. The initial training period sequence when one of the nerdy guys snaps is chilling and the effect of that on fellow soldiers might have been more dehumanizing than their experiences later. Still, the film explores how the line between right and wrong blurs when self preservation is the overriding emotion. Stanley Kubrick is a master at crating rough sequences and this could be his most realistic film dealing with real people and raw emotions. I believe that for Kubrick Vietnam was just another setting. His story could have been set in any war and that is what makes this an emotional drama more than a war film.

The makers of the film almost got killed making it. Their effort did not go in vain and the end product is perhaps the best movie on the conflict in the Indochine region to be made. Though it is Martin Sheen show all the way, the few scenes where Marlon Brando appears confirms that quality triumphs quantity. It is not an easy watch at 153 minutes but then good things require time. It is a hellish experience in the mould of ‘Das Boot’. At the denouement, the question about who is right and who is wrong is difficult to answer but then the soldier is on a mission and he must complete the task assigned to him. All this, because another soldier forgot which side he was on. Must watch.

One of the better films of 2012. It says the story of a Quartet whose members are at a turning point in their lives. When one of the members is diagnosed with Parkinson’s, strains appear in the relations between other members and hitherto suppressed feelings boil over. The film is quite engaging right from the beginning. The film scores quite high in the acting department. The story has only five characters but the director is able to keep it engaging. The only issue is that if you are not an expert in Western Classical, you will make a fool of yourself in some scenes. I can tell the difference between Mozart and Wagner but I bet there won’t be many who can detect mistakes if some notes of Beethoven are played wrongly. There are a few such scenes and you just have to trust the screenplay on such occasions. It is also an area that has seldom been explored in movies. So you get to know how much hard work goes into the making of a half decent musician. Definitely worth a watch.

James McAvoy has been heralded as the next superstar for quite some time now. In ‘Trance’, directed by Danny Boyle, he does his reputation no harm. The film is typical Danny Boyle stuff with scenes of time lapse photography, indulgently shot sequences and pulsating music. Here the protagonist loses his memory after a cooperating in an art heist. So the other gang members come up with the idea of using the services of a hypnotherapist to retrieve his lost memory. The story is sleek and missing any scene may mess up the understanding of what is happening onscreen. As it is, even if you watch all the scenes you will be little confused about some of them. The story is full of unreliable characters. So you can choose whom to trust. 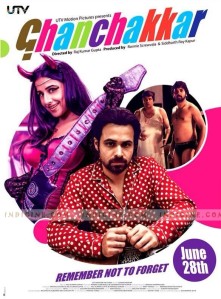 The funny thing with ‘Ghanchakkar’ s that it begins on a premise similar to ‘Trance’ reviewed above. That is, the lead character loses his memory after a heist but the similarity ends there. Whereas in ‘Trance’ they go to a hypnotherapist to retrieve the memory, in ‘Ghanchakkar’ they go to a baba. That sums up the difference in approach between Hollywood and Bollywood.  ‘Ghanchakkar’ is a painfully slow movie but with a rock solid climax. The issue is that you may not have the patience to sit through the movie to see the climax. I believe that the script would have looked good on paper but what is shown on screen is a cure for insomnia. The film is neither funny nor engaging. When a film has Emran Hashmi as the best performer, it says so much about its quality. The characters are annoying and the director deserves much of the flak for making it less interesting than a television serial. I did like the ending but then who cares about the dessert when the main course is stale.

Documentary which charts the growing influence of large companies in a historical perspective. Very educative but a little biased in my opinion. Still, must see.

Eagerly waiting for: ‘How to Train Your Dragon 2’ because a little fun never killed anyone.

Did you know: Steven Spielberg met Drew Barrymore when she acted in ‘E.T’. When she grew up she posed for Playboy. When Spielberg found out, he sent Barrymore a blanket so she could ‘cover up.’