Winner of numerous awards and a leading contender for this year’s Oscar for the Foreign Language category, ‘Ida’ is a film of high artistic standards. The movie suggests more than it says. The haunting beauty and edge that it creates even for its slow pace are remarkable. Shot in black and white and set in 1960s Poland, the film tells the story of nun who is about to take her vows. She is asked to visit her only surviving relative who happens to be her aunt. Together they take a journey that reveals a lot more than what she had bargained for. There is something timeless about the way this movie has been shot. The movie is interspersed with shots that linger on for long and show only till the chest level of performers on screen. The remaining part of the screen is left for the viewer to marvel at and interpret in myriad ways. ‘Ida’ is almost perfect and one of the best movies of the year.

Jake Gyllenhaal stars in a modern version of ‘Taxi Driver’ as an unemployed overzealous crime scene reporter who makes a killing by being the first on the scene of a crime. He is ably supported by Rene Russo (who is also the wife of director Dan Gilroy) as the dyed in the wool television executive. The film is as much a thriller as it is a study in behavior. It is creepy to listen to the protagonist speak of lessons on management which he has learned from the internet. It is also a commentary on the employment scene in USA where hiring an intern seems to be a new way of not paying for labour. The movie is reminiscent of some of the car scenes in ‘Michael Clayton’, a movie by the director’s brother Tony Gilroy. Watch this edge of the seat suspense drama for Jake Gykkenhaal.

David Fincher is one of the finest directors around who has only made good movies in his career ( a record he can be proud of). He ropes in Ben Affleck and the former Bond girl Rosamund Pike to be the sparring partners in a story about a marriage gone horribly wrong. A husband is a prime suspect in the disappearance of his accomplished wife. Far short of being perfect himself, he has to bail himself out of the quandary. In a story in which the TV channels have a starring role in aiding the flow of the story to the extent that the characters responses are guided by how they will be perceived by the media, the story itself is a commentary on the modern American marriage. Kudos to Rosamund Pike for showing the courage to play a diabolic character. ‘Gone Girl’ is not a shocking film. It is a mini spectacle which is a perverse joy to watch.

Brad Pitt in ‘Fury’ has the same dialogue that Jake Gyllenhaal has in ‘Nightcrawler’: “I will never ask you to do something I will not do myself.” The setting though, could not be more different. He heads a tank which is going all guns blazing attacking the Germans in the Second World War. The movie focuses on the brutal side of war and the toll it takes on the soldiers in the war. It is not for the faint hearted and is yet another showcase of the acting talent of Brad Pitt who I believe is an underrated actor. ‘Fury’ is one of the must watch movies of the year.

Following on the success of the mildly entertaining ‘The Inbetweeners’, the sequel takes the bunch of close knit and stupid friends on a trip to Australia where they have a string of adventures and also get lost in the middle of nowhere. Remarkable for its banter and the lightening speed at which the story is delivered, it hardly gives the time for the viewer to think about the logic and plausibility of the tale. This is one movie you cannot accuse of being slow. It is earnest in its attempts to tell what it believes is an entertaining tale. The good part is that it is not wildly off target.

Julianne Moore plays a linguistics professor who is diagnosed with Alzheimer’s disease. One of the Sony Pictures films to be affected by the epic hacking of the resources there, this movie is all about the performance of Julianne Moore which is difficult to erase from the memory. There is nothing remarkable about the theme itself. Similar movies have been made, the most remarkable one being ‘Away From Her’. This is a movie that deserved a release in theatres and not on the pirate sites. I hope Sony can forgive and forget. Bad puns aside, this is one of the better movies that will be released in 2015.

The only real Superstar in Indian cinema makes his return after a few years with this movie which tries to tell a story of substance and yet keeps it endearing to legions of fans. The movie makes all the right noises with Rajnikanth being the incarnation of all that can be good with a man. Replete with thinly veiled politics and throwing references to his previous movies, ‘Lingaa’ starts on a promising note (discounting the loopholes in the robbery scene). Soon enough, it takes in far more than it can chew. Essentially the story of a good Samaritan wronged by his own people, the movie is a cocktail of religion, politics and history. It is in the climax that the movie goes overboard and loses the semblance of normalcy that holds the movie together. A terrible score with poor songs by A R Rahman does not help the movie. The movie also suffers from the kind of love for the supposedly golden bygone era in which the kings were great rulers. This for most part of history is far from the truth. Also, the British imperialist has a chance at redemption but cut to the present , and the politician must be summarily eliminated. Watch it if you have nothing worthwhile to do.

Sonakshi Sinha’s good luck sign is to see Ajay Devgn with his pants down. Unfortunate. 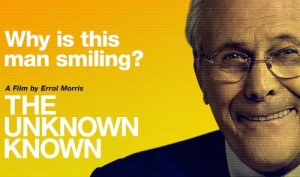 Confidence and stupidity are a terrible combination. Donald Rumsfeld explained.

Eagerly waiting for: ‘Unbroken’ from the “minimally talented” (according to Sony) director Angelina Jolie.

Did you know: For ‘Gone With the Wind’, 1400 actresses were interviewed to play the part of Scarlett O’Hara.